Kidde Recalls Fire Extinguishers with Plastic Handles Due to Failure to Discharge and Nozzle Detachment: One Death Reported

Kidde is recalling over 40 million fire extinguishers used in homes, cars, and boats because they potentially become blocked or fail to discharge during a fire.

The company has received a single report of a related death from 2014, when a fire extinguisher failed to work during a car fire.

But the numbers don’t stop there. The recall includes 134 models manufactured as far back as 1973 and as recently as August 2017. All the units have a plastic handle or plastic push button. Units with a metal handle or valve assembly are not included in the recall. The plastic handles and buttons can break or detach when force is applied.

Full Details can be found on the government recall website here to find exact model numbers of fire extinguishers affected by the recall.

This is the third Kidde issued recall for this type of fire extinguisher, and it’s by far the largest. The earlier recalls were made in March 2009 and February 2015. 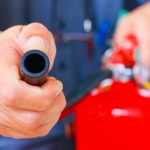